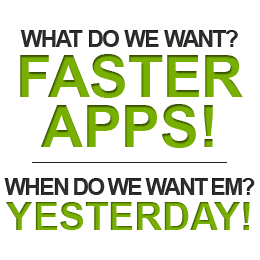 In Version 3.0, we've made several improvements, including, as promised in our initial Foundatio blog post, going full async.

Take a closer look at the new enhancements, below, and head over to the GitHub repo to try Foundatio today. We think you'll find it very handy.

For all our current users, you'll need to upgrade your Foundatio NuGet package and existing Foundatio code to use the async implementations/conventions. The update should be fairly straightforward - we haven't had or heard of any issues so far, including when upgrading Exceptionless.

We've gone 100% async, which means no more blocking synchronous code, allowing your apps to be even more responsive. For more on async and its benefits, take a look at this Microsoft article.

Along with going completely async, we've removed non async methods from the API and simplified the API overall. We wanted to make it easy for developers to roll out new implementations and use the existing API.

We also added new, useful methods across all the APIs to make it easier to perform common tasks. One example includes adding CalculateProgress() to WorkItemHandlerJobs. We hope these helpers allow you to be more productive.

Because we always want more speed out of our apps (and we know you do, too), we used Red Gate's ANTS Performance Profiler to profile various apps, such as Exceptionless, and track down "hot" sections of code. By hot, we mean those pieces of code devoured more resources and took longer to run than all other application code. By doing so, we were able to pinpoint core pieces of Foundatio that were performing poorly compared to what they could be doing. Then we fixed them.

Check It Out - Feedback Appreciated! #

We made many other improvements to ensure your apps run fast when using Foundatio, too many to be listed here. If you're already using it, just update your NuGet package to the latest version to take advantage of these improvements. If you're not using it yet, try it out. It's worth a shot, we promise!

Once you've given it a go, please let us know what you like, or what you hate, by posting a issue on Foundatio's GitHub Repo.

Until next time, happy coding!