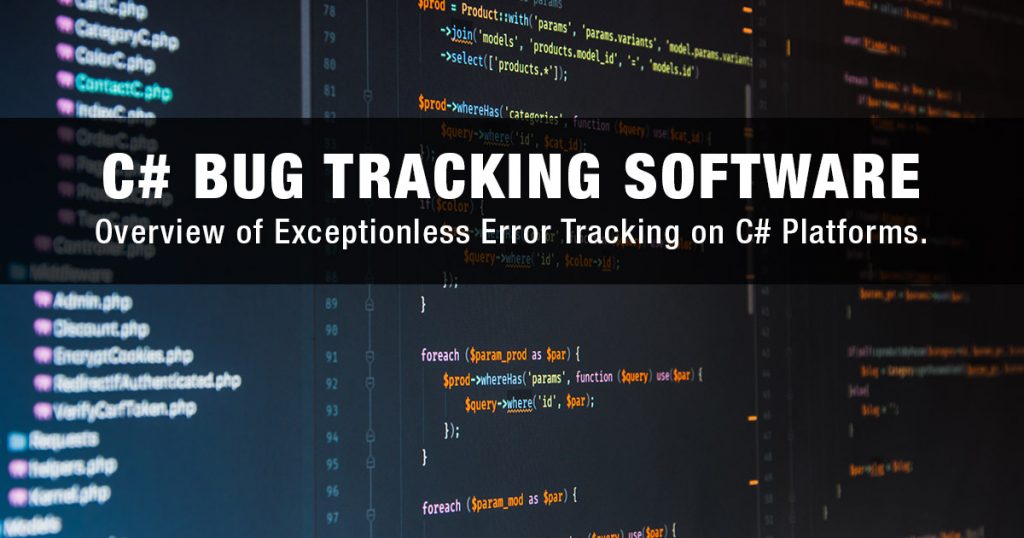 Bugs, exceptions, issues, faults, errors, incidents, whatever you want to call them, they’re unavoidable. No matter how elegantly you think you wrote your code, no matter how many user cases you think you’ve covered, your application is going to have bugs and part of our jobs is to find those bugs and fix them. You can track these bugs using an Excel or Google sheet (if you’re a glutton for punishment), but the best way is to use a bug tracking platform that tracks, records, reports, and manages these exceptions for you.

WHAT IS BUG TRACKING? #

In its simplest form, bug tracking is when a developer is alerted to an event when their code does not operate as intended. They catalog the issue, collect as much information as they can that led to said event, and attempt to recreate it so they can fix the problem.

As you can imagine, doing all of this manually becomes quite unwieldy the larger an application gets. On top of that, with larger applications comes additional layers of complexity that a user simply can’t account for or give you the proper information to set you on the path for resolving their bug. This is why it’s so important to have an automated event tracker.

A bug tracking software of any kind is a must have for any sort of application at any stage of development, even months or years after it goes live. The larger your product, the more important it is to have some form of bug tracking implemented. (This is also a tell tale sign of whether or not a development team is worth their salt.)

You can spend hours, days, weeks, and even months trying to track down a bug if you don’t have the right information. Having a software platform in place for tracking bugs helps your development team work smarter and faster when troubleshooting these issues. The software will record, document, and organize these bugs automatically with critical information about the user, event, and the application at the time it occurred. No more chasing down info. It’s already done for you!

C# is one of, if not the most used programming language of the last 15 years. It’s an elegant object oriented language that allows developers to build .NET applications. While it can be daunting at first if you aren’t familiar with it, it’s actually quite simple to use and relatively easy to learn. However, the applications can get quite complicated because of its structure. A misplaced bracket, variable, or object can cause cascading issues that aren’t easy to detect or remedy.

Due to the potentially complicated landscape that is a C# application, detecting, diagnosing, and fixing a bug can be a near-Herculean task, especially if you aren’t the developer that originally created said application. It may have been coded in a non-optimal way or due to time constraints, it had to be done in a hacky way that’s just waiting to implode. This is where a bug tracking solution for your C# application is an invaluable addition to your infrastructure.

You can’t be everywhere at once and see everything, especially in the larger C# applications. Having C# bug tracking software guarantees that you can be with it collecting data in the background. Regardless of when a bug occurs, our platform will have a full report with everything you need to set your development team in the right direction.

Exceptionless’ automated bug tracking already tracks an enormous amount of contextual information automatically, but you can track even more information by creating a custom object. If you want to grab info on what was in a customer’s before it threw a bug, custom object. Once created, you can set these objects as top level tabs to improve their visibility.

Every bug is intelligently tracked on our dashboard and consolidated into stacked groups based on where it occurred and the type of bug. Not only does this keep things nice and tidy, but it also lets you triage whether or not a bug needs to be fixed as soon as possible. These reports also persist after the bug has been fixed so you have historical data just in case the bug resurfaces later.

Our bug reports extensively tracks a robust set of information to help you quickly track down and fix the error. The default information covers type of error, stack trace, date, request information, and environment information, but that can easily be expanded upon and tailored to your application with custom objects.

We have extensively documented our platform and API to make it easy and painless to use. You can use our fluent API to easily add custom objects, tags, and other information as well as marking certain errors as vitally important.

RECAP
Troubleshooting and fixing bugs is part of our jobs as developers and, as the saying goes, we need to work smarter, not harder so we can spend more time creating new features to our applications rather than patching errors. Exceptionless’ C# bug tracking software will intuitively, and automatically, organize any bugs that do occur to help you pinpoint the cause so your application can get back on track.