As you guys know, we've been working on notification improvements lately. This latest video update by Blake is no different and involves Slack integration!

If you're not familiar with Slack, definitely check it out. It's a great app for communicating with your team, and much more. For Exceptionless, it's been something we've wanted to integrate closely with for a while now, because email can be very tedious and overwhelming. With Slack integration, you can set up a specific channel for your Exceptionless notifications to go to, and have an organized eye on your events.

Watch the video above for an explanation of the integration, and see below on how to set it up for yourself.

Set up Slack Notifications for Exceptionless #

First, go into your project's settings in the Exceptionless app and click on the Integrations tab. 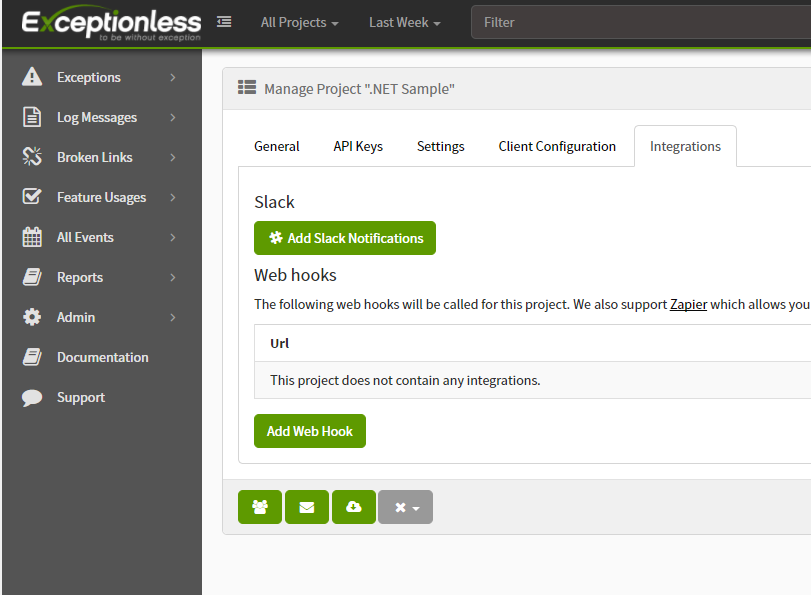 Once authorized, you can then configure the different notification settings by going back to the Exceptionless app and into the project's integrations tab again. 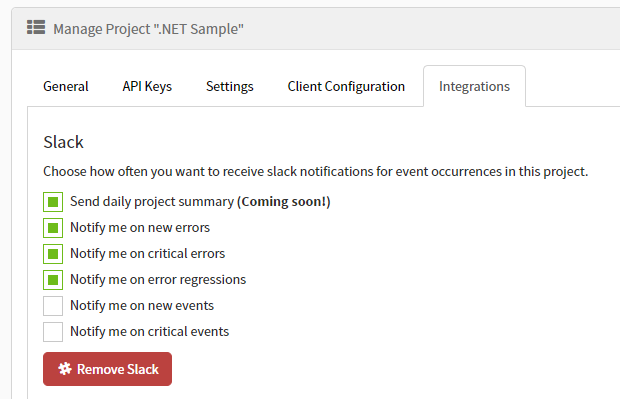 Once integrated and configured, notifications will look something like the below screenshot, with the message, type of event, stack trace, links to actions, etc. 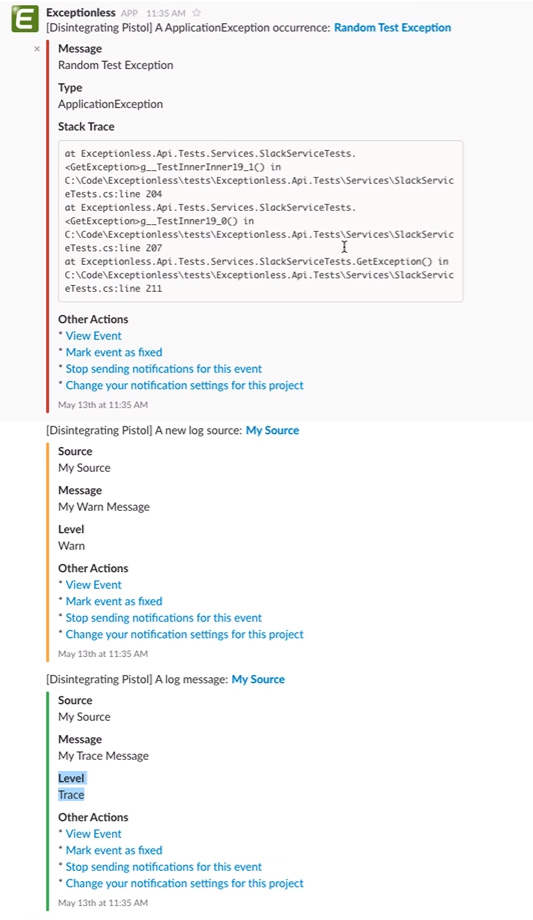 We're excited to keep improving notifications, and would love for you guys to test this out for us.

Integrations with other chat & productivity tools like HipChat and Microsoft Teams are on our list, as well, so if you use these please ping us and let us know so we can gauge interest! 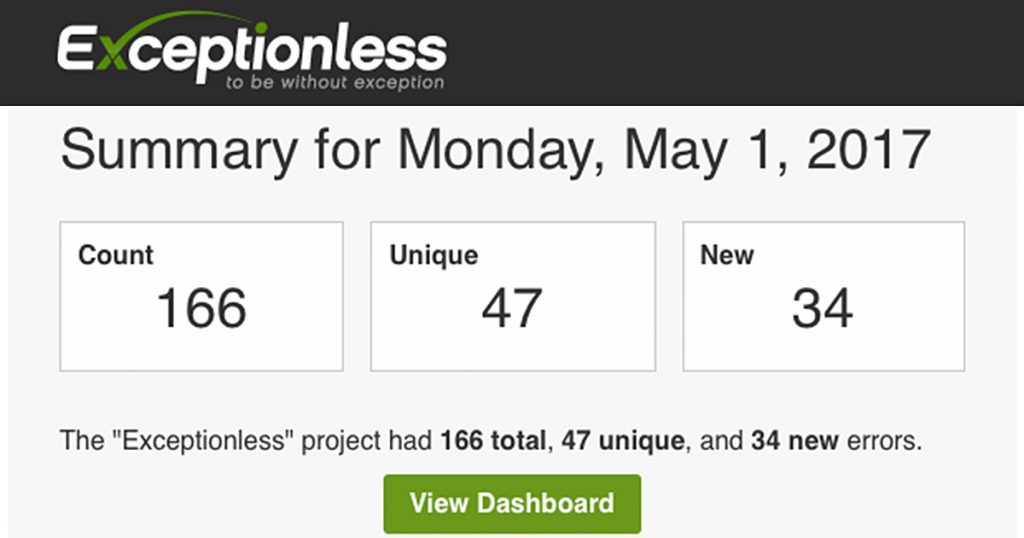 Recently, we made several improvements to our email notifications, adding additional details, improving rendering, and more. Blake has mentioned it in a few of his weekly update videos, but today we wanted to walk you through it and add a few more details, with examples. Check it out!

We decided to use Zurb's Foundation for Emails to help us create emails that look great on all email clients. The reason we went with Zurb is because it has clean markup that translates to good old (ugly) HTML that just works. It also works great with Handlebars.Net which we use to render the email content.

An example of one of our event notification emails can be found here.

Then, we run a Node.js build task to transform the templates into some pretty crazy html markup that works everywhere. The markup at that link contains the Handlebars.Net syntax.

These templates are stored as embedded resources so we can use them from any environment and render them out with ease! Here is a code example of how we perform that task.

We added JSON-LD support, to the emails to give us rich contextual actions, by starting with this Google Developer tutorial and ended up with the below implementation. It's worth noting that we had to go through their verification process for the actions to be enabled.

We tested the emails in Outlook for Windows and Mac, Paper Cut, Gmail on Safari, and Apple Mail. Then, we used Litmus to test a wide range of clients before publishing and pushing everything live.

We hope our build out here can help other developers, and we would love to hear your feedback, questions, or comments either here on the blog or over on GitHub!

We've snuck in lots of updates for this past week! New features have been added, such as collecting project-level usage statistics, the ability to add notes to API keys, and much more. Oh, and we're no longer throttling free plans! That's for Exceptionless core, but we've also made updates  to the Exceptionless UI and Foundatio core, Foundatio.Repositories, and Foundatio.Parsers. Check everything out, below.

In the 5/1/17 weekly update, Blake talks email notification improvements, bug fixes, and Foundatio.Repositories and Foundatio.Parsers updates. Check out the video above or read the details below.

In the past few weeks, we have made massive improvements to the daily summary emails, and added support for json-ld. You can keep up with continued email improvements over on issue 177 on GitHub. Let us know what you think there!

We updated Foundatio.Repositories so that it no longer ignores the version property.

For Foundatio.Parsers, we merged code and server mapping properties.

In this week'd update, Blake does a little traveling and speaking, and both Exceptionless and Foundatio.Repositories get an update!

On May 3, Blake spoke at the North Dallas .NET User Group meetup in Plano. The topic was Exception Driven Development, and of course he killed it! Naturally, the Exceptionless love was shared to all.

For Exceptionless, we worked on upgrading the email templates to use Zurb for emails and handlebars. We also fixed an issue where you could only log in 15 times in a 15 minute time period.

Nothing too crazy going on in this week's update. A few tweaks to Exceptionless, Exceptionless.NET, and Exceptionless.JavaScript. Check out the details below, and don't forget to let us know how we're doing!

We also made some good strides in reducing the amount of IO work the event post queues have to do. Woohoo!

Lastly, for Exceptionless core, we merged in MailKit and continued improving email notifications.

The only really notable thing we did for the .NET client is fix the ProcessQueue method, making sure it blocks until the queue has been processed.

For our JavaScript client, we want to work on supporting universal apps, but first we have to upgrade to the latest version of TypeScript, so we did some work this week toward that.

Last week we announced release notes for Exceptionless 4.0.2, Exceptionless.NET 4.0.3, and Exceptionless.UI 2.6.2. In our weekly update this week, we review some of those changes/updates, Foundatio changes, and more. Check it out!

For Foundatio, we updated the Azure storage copy implementation to copy server side, fixed an issue where FolderFileStorage wasn't behaving properly when renaming files that exist, and fixed a Redis cache client issue where deleting cache items by wild card was erroring out if there were no matching keys.

For the .NET client, we merged in changes to csproj and released version 4.0.3. Make sure to check out the release notes and upgrade!

In Exceptionless.UI, lists of tags now wrap to the next line, and we fixed an issue where long user names would cause the UI to go crazy.

Here, we fixed a caching issue where you couldn't set the key without enabling cache, and we simplified index creation and stopped using a lock. 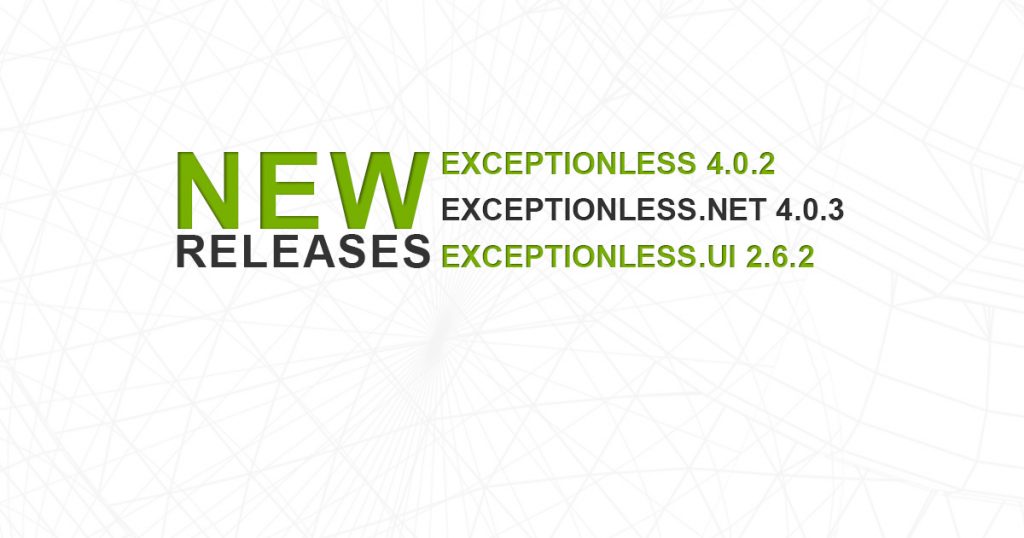 This past week we released Exceptionless 4.0.2 and Exceptionless.NET 4.0.3, consisting of maintenance updates that fixed several usability issues for self hosters, various performance, issues, bug fixes, and some general improvements.

Below is a highlight of the release notes, and don't forget to let us know how we're doing or what can improve by following the relevant links to GitHub and posting an "issue."

Lastly, thanks to all of our contributors for helping us solve problems, add functionality, and improve Exceptionless!

You should only worry about upgrading if you are a self hoster. If this is the case, please see the Exceptionless self hosting documentation. Note that changes to the Elasticsearch configuration were made in this release, so make sure to review the documentation for more information.

Just update your NuGet packages. For more info, check out the upgrade guide.

Q2 2017 is here already, whether we are ready for it or not! In March, we released several new updates to Exceptionless and Foundatio, so our first update in April isn't crazy, but here we go!

March was a productive month! We got tons done, and we're here to share everything with you so you're up to date and can hold us accountable if you notice any bugs in the changes.